Today, I came across the announcement that there is a new version of “the Connector” – in the NAV community better known as “They CRM Connector” – and officially called “Connector for Microsoft Dynamics”. The announcement is already dated from June 18th, but I totally missed it .. . Here you can read more: http://blogs.msdn.com/b/dynamicsconnector/archive/2013/06/18/connector-for-microsoft-dynamics-v3-released-today.aspx …

END_OF_DOCUMENT_TOKEN_TO_BE_REPLACED

Permanent link to this article: https://www.waldo.be/2013/07/17/connector-for-microsoft-dynamics-v3-released/ 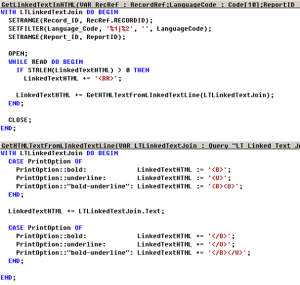 I noticed it’s not known too well .. so I decided to put this in a small blogpost. Basically, you can use HTML on Dynamics NAV 2013 reports .. and I’m going to share how you can do that in just a few basic steps. Step 1: Create HTML Text It doesn’t really matter how/where/… …